A Few Things to Unwrap on Drupal’s Birthday

This milestone is the perfect time to talk about some of the findings of our recent community survey. The survey findings offer a window into what community members are thinking as the project matures and evolves. It also gives us at the Drupal Association a way to better understand what we’re doing right and what we could be doing better. There aren’t many surprises (and that’s a good thing), but all of the findings are educational. Here are three results we thought were particularly interesting and insightful.

Drupal 8 Will Be Broadly Adopted

In the survey, about 80% of respondents said they either plan to start using Drupal 8 as soon as it is released, or plan to adopt it at some point after release. Another 8% said they did not have specific plans to adopt, but do plan to evaluate Drupal 8.

The overwhelming majority of respondents said they use Drupal.org more than once per week. Most also say they are satisfied or somewhat satisfied with the site. While that result is encouraging, it does not change the important mission to improve the experience of the site and make it a better tool for everyone from first time visitors to those who spend the majority of their working time on the site. 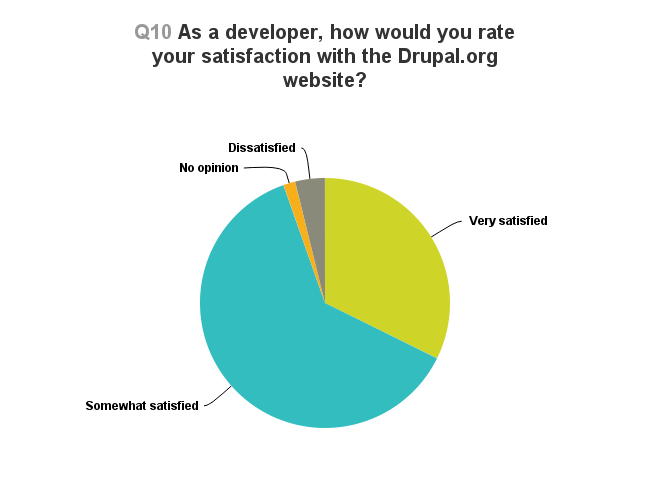 We Need to Create Broader Awareness of Drupal Association Programs

Community members who took the survey have great awareness of DrupalCons. Awareness of the work we are doing on Drupal.org seems to be steadily growing. But awareness is relatively low for Community Grants and our Supporter Programs that provide a way for organizations to give back to the Project. That awareness is clearly something we need to improve to promote transparency.

If you would like to read the full results, you can access them here (2.8M PDF). Thanks for reading, and thanks for being a part of this amazing community.