We now present the first release candidate for Drupal 8.0.0! Drupal 8 includes a tremendous number of new features and improvements for both users and developers.

The first release candidate provides a great opportunity to begin developing with Drupal 8, especially for:

Drupal 8 itself is very functional straight out of the box — many of the top Drupal 7 modules are now included in core, and several features have been made more flexible to avoid the need to install many other modules. Evaluate your needs, and you may easily find that everything you need for a project is already included in Drupal 8 core. Check out our slides about Drupal 8 to learn about the changes.

The new version also includes a revamped Migrate module to update existing Drupal 6 and 7 sites to Drupal 8 directly. The migration feature is currently marked “experimental,” meaning it is not yet fully supported and we are still working to improve it. For this reason, the Drupal 8 release candidate does not yet provide a user interface for migrations. Use the Migrate Plus and Migrate Upgrade modules to test migrations now, or read more about Migrate in core.

There are a number of modules already ported to Drupal 8 as well as themes already being developed. We set up the contrib tracker project to make it easier to track the status of the ports of contributed modules. 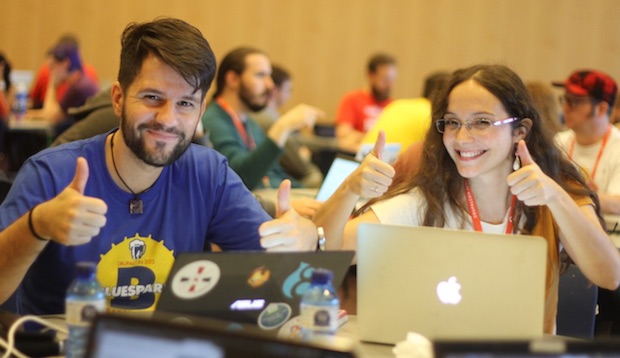 DrupalCon Barcelona Drupal 8 sprint photo by Pedro Lozano (under the CC BY 2.0 license)

Porting modules and themes to Drupal 8

If you have not done so already, now is the time to ensure that your modules and themes will work with the new version. While there are many changes in Drupal 8, we wanted to make it as easy as possible to get started porting modules. We suggest you use Drupal Module Upgrader to run a first pass of code upgrades. Some things will be automatically upgraded while others will get a @todo comment or will be left untouched.

To help you learn and apply the new APIs, the api.drupal.org site has overviews and short examples of all major Drupal 8 APIs. The Drupal.org handbooks have in-depth guides with more background information on each API as well. We also have a complete list of all API changes to Drupal 8, spanning the 4.5 years of Drupal 8’s development.

Instead of using our own home-brewed templating system from Drupal 7 and earlier, Drupal 8 uses the Twig templating engine. Many of the concepts from previous versions of Drupal still apply with Twig. We are working on a guide for you to help update your themes. Also check out the Drupal 8 theming documentation for more information.

Be sure to file any core bugs that you may find while updating your module or theme.

The interface strings are officially frozen now. Only error corrections, removals or additions of whole strings, and fixes required for critical issues may be made to the interface text from this point forward. This is the best time to translate Drupal 8, so your translations will be available when the final version is released. The installer now comes with automated translation downloads, so whatever you translate now will be useful for all Drupal 8 installs. Localize.drupal.org has a summary page about core translation status in all the supported languages with a step-by-step guide in the sidebar to help you contribute.

The user interfaces, interactions, and “look and feel” of Drupal 8.0.0 are now frozen and will only be changed if required for critical bug fixes. If you previously put your documentation, instruction video, or book project on hold, now is the time to pick it up again. Now is also the time to update documentation on Drupal.org and to get documentation fixes into Drupal 8, so the explanations are correct. Thanks for your contributions!

Be aware that Drupal 8 will employ semantic versioning, with new “minor” releases (backwards-compatible with API additions and new features) approximately every six months. So strings, user interfaces, and other visual aspects of Drupal will be improved throughout the entire Drupal 8 process, which may require subsequent updates to these materials.

During the release candidate phase, only critical fixes and documentation improvements will be committed to Drupal 8 core (plus certain non-disruptive “rc target” changes at core committer discretion). Other issues that have been reviewed and tested by the community may remain uncommitted until after 8.0.0 to ensure that critical bugs can be fixed quickly without risking regressions. Read more about the allowed changes during the RC phase.

We will schedule an official release date for 8.0.0 when we are confident that the rate and nature of incoming critical bugs has slowed enough to ensure a stable release. Until then, release candidates of Drupal 8 will be released twice a month concurrently with the Drupal 6 and 7 release windows.

We are confident that our code is stable enough for wider testing by site owners, developers, and end users. There are however still known issues with Drupal 8.0.x, including major bugs. Help resolve these issues by testing Drupal 8 and searching for existing bug reports and adding more information to help resolve those bugs. If your suspected bug hasn’t been reported yet, submit a bug report.

There is a known issue with response cache headers sometimes exceeding hosting configuration limits that may cause some pages to not be viewable on some hosting providers. If you run into this, see that issue and its related issues for details.

Starting now, any security issues discovered for Drupal 8 should be kept confidential and reported using the Report a security vulnerability link on the Drupal project page in order to protect existing sites. Through December 31, 2015, the Drupal 8 security bounty is also still active, so you can get paid for finding security issues and reporting them in our private tracker! See the security team page for more information on Drupal security.

Talk about the release candidate!

We suggest the #drupal8rc hashtag for Twitter, Facebook, etc. posts. To mention and find conversations about work already made with Drupal 8, use #madewithd8. We can’t wait to see what you make with Drupal 8!