Drupal 8.3.0, the third minor release of Drupal 8, is now available. With Drupal 8, we made significant changes in our release process, adopting semantic versioning and scheduled feature releases. This allows us to make extensive improvements to Drupal 8 in a timely fashion while still providing backwards compatibility.

This new version includes improvements to authoring experience, site administration, REST support, and a stable version of the BigPipe module. It also includes new experimental modules to abstract workflow functionality, to lay out content types differently (e.g. articles are two column vs. press releases are three column), and to provide a general layout API for contributed modules. Many smaller improvements for the experimental Content Moderation module are included as well. (Experimental modules are provided with Drupal core for testing purposes, but are not yet fully supported.) 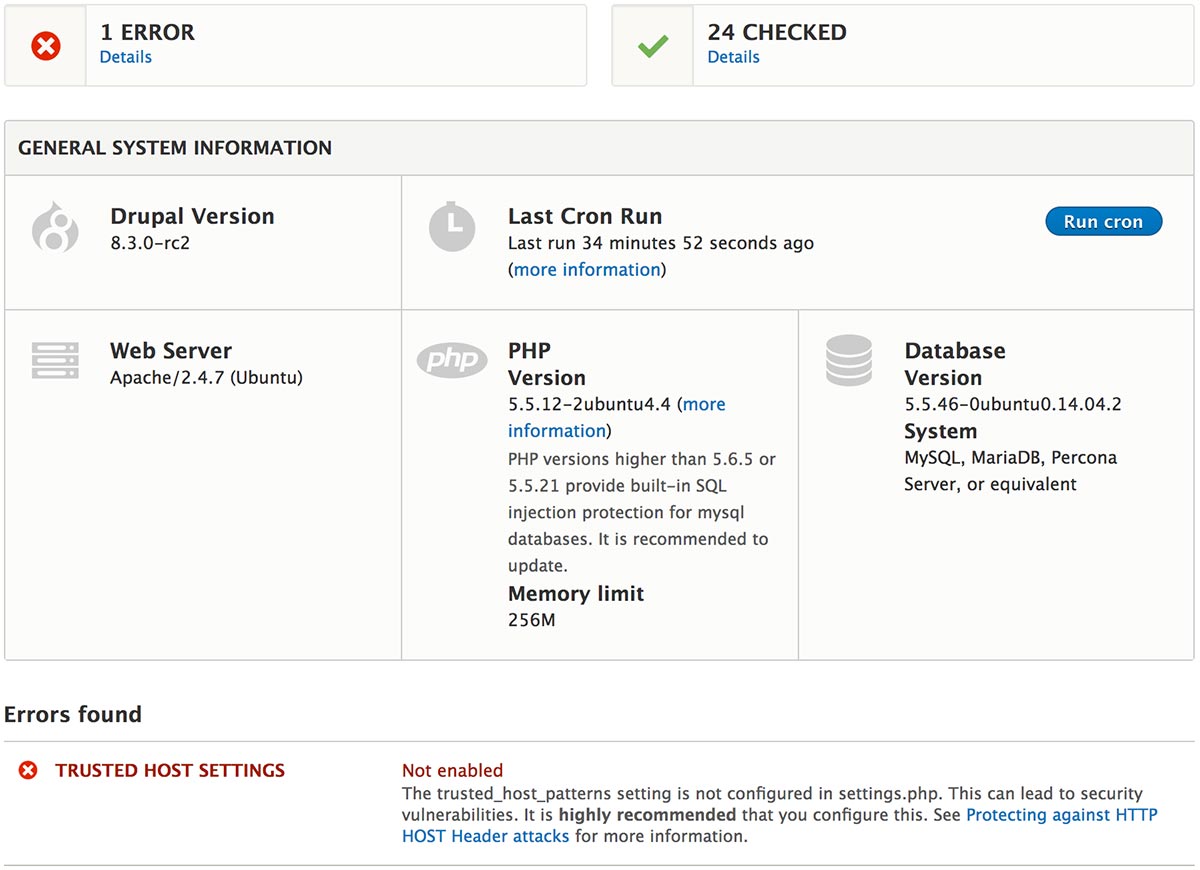 Other incremental enhancements include:

The core BigPipe improvements introduced in 8.3.0 are also utilized by the Sessionless BigPipe contributed module to use the same technique for serving the first (yet uncached) response to anonymous visitors.

Drupal 8.3 continues to expand Drupal’s support for web services that benefit decoupled sites and applications, with bug fixes, improved responses, and new features. It is now possible to register users from the REST API, 403 responses now return a reason why access was denied, for greatly improved developer experience, and anonymous REST API performance has been increased by 60% when utilizing the internal page cache. The REST API also got a massive overhaul of its test coverage.

The new experimental Field Layout module provides the ability for site builders to rearrange fields on content types, block types, etc. into new regions, for both the form and display, on the same forms provided by the normal field user interface.

Field Layout also uses the new the Layout Discovery module, which provides an API for modules or themes to register layouts as well as five common default layouts. By providing this API in core, we help make it possible for core and contributed layout solutions to be compatible with each other. The following contributed modules already have development versions that support the new API:

The Content Moderation module included with Drupal 8.2.x is now accompanied by a more abstract Workflows module that took over the underlying workflow functionality and API. This allows additional modules to apply workflows that do not deal with content publication, such as for users or products. The Workflows module provides a user interface to package states with their transitions in a workflow, which Content Moderation can then apply to content, making configuration much easier.

There are several other smaller improvements. It is now possible to moderate non-translatable entity types, entity types without bundles, and any entity type that supports publishing (not just nodes). Moderation states are also reverted when revisions are reverted.

What does this mean to me?

Updating your site from 8.2.7 to 8.3.0 with update.php is exactly the same as updating from 8.2.6 to 8.2.7. Modules, themes, and translations may need small changes for this minor release, so test the update carefully before updating your production site.

Drupal 7 is still fully supported and will continue to receive bug and security fixes throughout all minor releases of Drupal 8.

Most high-priority migrations from Drupal 7 to 8 are now available, but the migration path is still not complete, especially for multilingual sites, so you may encounter errors or missing migrations when you try to migrate. That said, since your Drupal 7 site can remain up and running while you test migrating into a new Drupal 8 site, you can help us stabilize the Drupal 7 to Drupal 8 migration path! Testing and bug reports from your real-world Drupal 7 sites will help us stabilize this functionality sooner for everyone. (Search the known issues.)

Drupal 6 is not supported anymore. Create a Drupal 8 site and try migrating your data into it as soon as possible. Your Drupal 6 site can still remain up and running while you test migrating your Drupal 6 data into your new Drupal 8 site. Core now provides migrations for most Drupal 6 data, but the migrations of multilingual functionality, references, and dates in particular are not complete. If you find a new bug not covered by the known issues with the experimental Migrate module suite, your detailed bug report with steps to reproduce is a big help!

Minor releases like Drupal 8.3.0 include backwards-compatible API additions for developers as well as new features. Read the 8.3.0 release notes for more details on the improvements for developers in this release.

Since minor releases are backwards-compatible, modules, themes, and translations that supported Drupal 8.2.x and Drupal 8.1.x will be compatible with 8.3.x as well. However, the new version does include some changes to strings, user interfaces, and internal APIs (as well as more significant changes to experimental modules). This means that some small updates may be required for your translations, modules, and themes. See the announcement of the 8.3.0 release candidate for more background information.