As a group, we agreed that we had learned a lot from watching the JavaScript community grow and change since our initial exploration. We agreed that today, React would be the most promising option given its expansive adoption by developers, its unopinionated and component-based nature, and its well-suitedness to building new Drupal interfaces in an incremental way. Today, I’m formally proposing that the Drupal community adopt React, after discussion and experimentation has taken place.

Two years ago, it was premature to pick a JavaScript framework

Three years ago, I developed several convictions related to “headless Drupal” or “decoupled Drupal”. I believed that:

(For the purposes of this blog post, I use the term “framework” to include both full MV* frameworks such as Angular, and also view-only libraries such as React combined piecemeal with additional libraries for managing routing, states, etc.)

By September 2015, I had built up enough conviction to write several long blog posts about these views (post 1, post 2, post 3). I felt we could accomplish all three things by adding a JavaScript framework to Drupal core. After careful analysis, I recommended that we consider React, Ember and Angular. My first choice was Ember, because I had concerns about a patent clause in Facebook’s open-source license (since removed) and because Angular 2 was not yet in a stable release.

Focusing on Drupal’s web services instead

I did a deep dive on the state of Drupal’s web services in early 2016 and helped define various next steps (post 1, post 2, post 3). I asked a few of the OCTO team members to focus on improving Drupal 8’s web services APIs; funded improvements to Drupal core’s REST API, as well as JSON API, GraphQL and OpenAPI; supported the creation of Waterwheel projects to help bootstrap an ecosystem of JavaScript front-end integrations; and most recently supported the development of Reservoir, a Drupal distribution for headless Drupal. There is also a lot of innovation coming from the community with lots of work on the Contenta distribution, JSON API, GraphQL, and more.

The end result? Drupal’s web service APIs have progressed significantly the past year. Ed Faulkner of Ember told us: “I’m impressed by how fast Drupal made lots of progress with its REST API and the JSON API contrib module!”. It’s a good sign when a core maintainer of one of the leading JavaScript frameworks acknowledges Drupal’s progress.

The current state of JavaScript in Drupal

Looking back, I’m glad we decided to focus first on improving Drupal’s web services APIs; we discovered that there was a lot of work left to stabilize them. Cleanly integrating a JavaScript framework with Drupal would have been challenging 18 months ago. While there is still more work to be done, Drupal 8’s available web service APIs have matured significantly.

There is a lot to like about how Drupal’s web service APIs matured and how we’ve seen Drupal integrated with a variety of different frameworks. But there is also no denying that not having a JavaScript framework in core came with certain tradeoffs:

One trend we are now seeing is that traditional MV* frameworks are giving way to component libraries; most people seem to want a way to compose interfaces and interactions with reusable components (e.g. libraries like React, Vue, Polymer, and Glimmer) rather than use a framework with a heavy focus on MV* workflows (e.g. frameworks like Angular and Ember). This means that my original recommendation of Ember needs to be revisited.

Several years later, we still don’t know what JavaScript framework will win, if any, and I’m willing to bet that waiting two more years won’t give us any more clarity. JavaScript frameworks will continue to evolve and take new shapes. Picking a single one will always be difficult and to some degree “premature”. That said, I see React having the most momentum today.

My recommendations at DrupalCon Vienna

Given that it’s been almost two years since I last suggested adding a JavaScript framework to core, I decided to talk bring the topic back in my DrupalCon Vienna keynote presentation. Prior to my keynote, there had been some renewed excitement and momentum behind the idea. Two years later, here is what I recommended we should do next:

In my keynote, I proposed a new strategic initiative to test and research how Drupal’s administrative UX could be improved by using a JavaScript framework. The feedback was very positive.

As a first step, we have to choose which JavaScript framework will be used as part of the research. Following the keynote, we had several meetings at DrupalCon Vienna to discuss the proposed initiative with core committers, all of the JavaScript subsystem maintainers, as well as developers with real-world experience building decoupled applications using Drupal’s APIs.

There was unanimous agreement that:

We created an issue on the Drupal core queue to discuss this more. 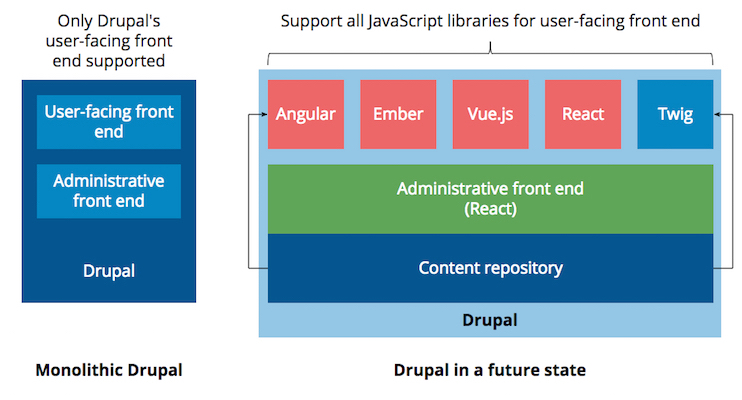 Drupal should support a variety of JavaScript libraries on the user-facing front end while relying on a single shared framework as a standard across Drupal administrative interfaces.

After meeting with core maintainers, JavaScript subsystem maintainers, and framework managers at DrupalCon Vienna, I believe that React is the right direction to move for Drupal’s administrative interfaces, but we encourage everyone in the community to discuss our recommendation. Doing so would allow us to make Drupal easier to use for site builders and content creators in an incremental and reversible way, keep Drupal developers’ skills relevant in an increasingly JavaScript-driven world, move us ahead with modern tools for building user interfaces.

Special thanks to Preston So for contributions to this blog post and to Matt Grill, Wim Leers, Jason Enter, Gábor Hojtsy, and Alex Bronstein for their feedback during the writing process.