Explore the stellar neighborhood with your browser

Visualizing the exact location of every star in the galaxy is a problem of, well, galactic proportions. With over 200 billion stars, capturing every detail of the Milky Way currently defies scientists and laptops alike. However, using imagery and data from a range of sources, including NASA and the European Space Agency (ESA), we were recently able to take one small step in that direction by plotting the location of the stars closest to our sun.

The result is a new Chrome Experiment called 100,000 Stars that visualizes the stellar neighborhood. Using your mouse or trackpad, you can zoom in and out to explore our galaxy. Zooming in reveals the names of the most prominent stars close to our sun – click each name to learn more about it and see a digital rendition. 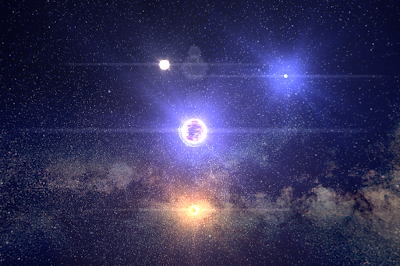 Zooming in further shows the relative location of the Oort cloud, the planetary orbits, and finally the Sun. Zooming out gives you some context for where we are in the Milky Way, although please keep in mind this view is an artist’s rendition. Click the tour button in the upper left for a quick trip to some of the coolest perspectives in the galaxy.

The experiment makes use of Google Chrome’s support for WebGL, CSS3D, and Web Audio. Music was generously provided by Sam Hulick, who video game fans may recognize as a composer for the popular space adventure series, Mass Effect.

As you explore this experiment, we hope you share our wonder for how large the galaxy really is. It’s incredible to think that this mist of 100,000 measurable stars is a tiny fraction of the sextillions of stars in the broader universe.