Kevin Thull, from behind the camera 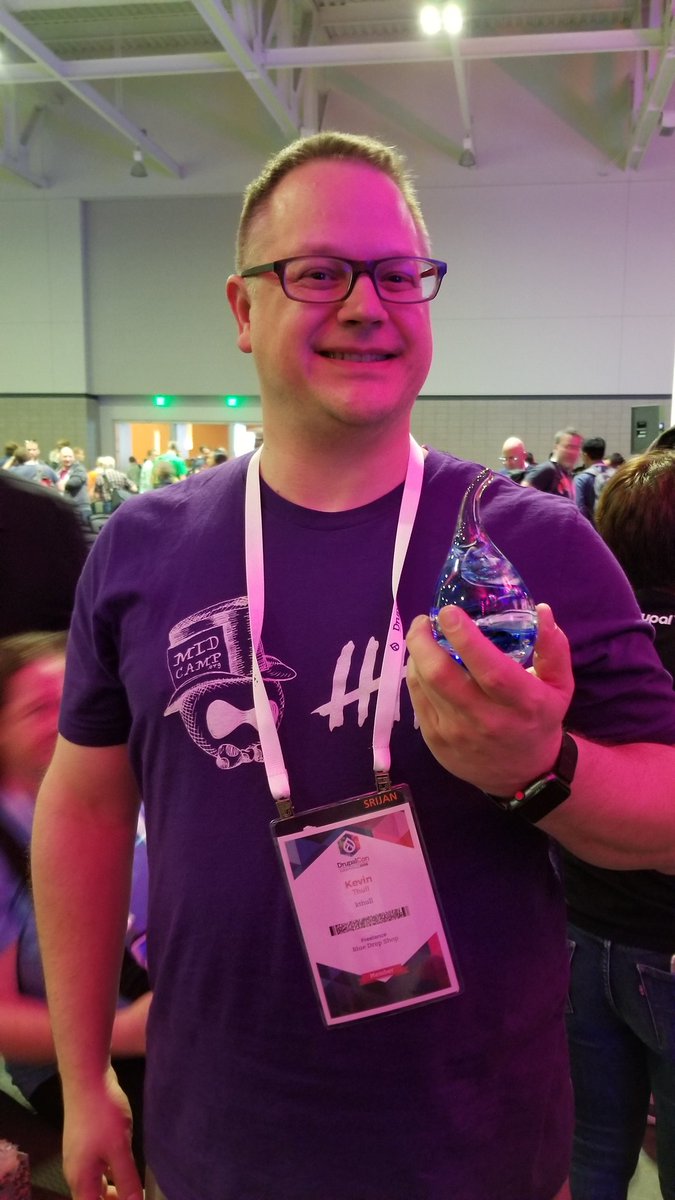 Chances are if you’ve attended any of the Drupal camps in North America you’ve run into Kevin Thull. He’s the fellow that is dashing from room to room before the first session begins to set up the AV equipment and checking in with presenters making sure they all “push the red button”. Because of him, we are all able attend the sessions we miss while busy elsewhere. He is personally responsible for recording over 800 sessions and donating countless hours of his time.

Not only does he record sessions at camps, he also helps organize Midwest Drupal Camp. For this next year he has been charged as their fearless leader. He will be working on their web team, arranging catering, organizing the venue, as well as doing all the audio visual.

This year at DrupalCon Nashville the Drupal Community awarded Kevin the Aaron Winborn award. The Aaron Winborn award is presented annually to an individual who demonstrates personal integrity, kindness, and above-and-beyond commitment to the Drupal community. Kevin’s commitment to capturing knowledge to share with the whole community is truly inspirational. He has provided a platform that helps tie local Drupal Communities together.

Ironically, AmyJune had chosen to write this spotlight on Kevin a few weeks before DrupalCon. AmyJune had asked him if he was coming to Nashville and he relayed that he had a prior commitment to attend another conference for his job. Unbeknownst to us, during the interview Kevin knew he had been awarded the honor and managed to keep it a secret. While he did mention that the marketing conference only ran through Wednesday, AmyJune was pleasantly surprised to see him take the stage.

Well, not too surprised, after all he truly deserves the honor.

How long have you been involved in the Drupal community?

My first meet up was when the Using Drupal 6 book first came out. I would say that is when I first started getting involved in the community. So, that’s close to 10 years now.

I started recording Drupal Camps back in 2013. The official Chicago Camp was having issues and so we as a far western Suburban group decided to have our own camp. I thought I could do some of the logistics and session recordings since that’s what I do for work. I had the same setup with video cameras in the back of the room and I spent countless hours rebuilding these presentations. It’s a similar process, but it’s a very a different presentation between a marketer and someone from the Drupal community giving a presentation on diversity. A marketer might have 20 slides, but a Drupal talk may have 104.

Everybody at the time was telling me I was insane for doing this, but my response was, “Nope, it’s important.”

In 2014 was the first MIDCamp and we were able to get the DA recording kits. But that was not great either. There was a lot of setup, they were expensive to ship them back and forth, they didn’t work terribly well, so that’s when Avi Schwab ( https://www.drupal.org/u/froboy) and I started collaborating. He did all the setup for the laptops and I did all the running around from room to room and post production. We brainstormed and I started doing research. The next Suburban Camp is when I had my first test kit for what I am using today.

I saw that you recorded Pacific Northwest Drupal Summit remotely this year? Can you share that experience with us?

That’s a funny story. It was the same weekend as Jersey Camp and I tend to favor camps I have already recorded. They had committed before Pacific Northwest Drupal Summit and when Amber Matz saw me at BADCAmp, I explained the conflict. I told her I had started working on the next step and would be shipping the kits to camps. I sat with her and showed her how the kit worked and she said it didn’t seem too difficult, and we said “Let’s do this”.

I got a new case, sent 5 kits to them. It’s funny how talking with the organizers of camps helps all of this come together. Because later at New England Camp, I was explaining to one of their organizers how I was shipping kits and he suggested labeling the cables. I thought that was brilliant so I got a label maker and labeled all the cables. I wrote out more a detailed instruction guide, and all these things were things I had been meaning to do.

I sent 5 kits, insured FedEx for around $50, whereas the DA sends this giant pelican case that must cost hundreds of dollars. That was part of the plan originally; we wanted something lightweight and easy to use. I heard they had an 84% capture rate which is a great start. The issue is that non-Macs recordings have no sound and so I have to lay up the backup recording into the video. A lot of times that back up recorder gets turned off or stopped for some reason.

While I was in Florida I started working on pinpointing why non-Mac machines don’t have audio. Later, I had mixed success at MIDCamp, I captured a couple, some didn’t work, one being an Ubuntu build. At lunch I worked with that presenter to test various setups and we found a setup that worked. Once I can crack that nut, then shipping with even more instructions will increase the capture rates.

Now that you’re capturing some camps remote, how does that cut into how much you like to travel?

I do like to travel, but there are a couple of issues. A) I can’t be everywhere. B) I am potentially doing 13 or 14 camps this year. Which is cool now, but it may not be cool in couple of years. And C) I don’t do Drupal at work and when I first starting doing this I was using all my PTO. I don’t do any Drupal at work, but I brought back all kinds of information and my boss recognized that. She said I could count those as remote days, but of course there’s a limit.

There is a balance to be found between visiting the camps and sending the kits remotely.

What are some of your favorite camps?

Everybody asks me that, that question is not fair. I like them all. It’s generally the places I know the most people and/or I go ahead of time to play before camp starts. I am not a solo traveller, so if I know a lot of people at the camp I tend to like those: Badcamp, Twin Cities, St. Louis, Texas (cuz of Austin), and Montreal.

What are the things you like to do before a camp that makes it more fun?

HaHaHa, eat and drink all the things. Bar Crawls, Food Crawls, you name it.

Have you given any thought to helping with camps outside the States?

I would like to, but it’s a time and cost issue. The camps now reimburse my travel expenses. To fly to a European camp – I don’t know if that would be in their budget.

It’s interesting, Mauricio Dinarte tailed me for a few camps and he wanted, and he did, get some kits to start recording Nicaragua. One day he tweeted that he saw my kits at Drupal Camp Antwerp. It’s cool to see how these things grow organically. There’s not a camp that goes by where someone from the community doesn’t ask me about how everything works.

Kevin’s not just the guy who reminds us all to push the red button. He is the guy who loans out his phone when a presenter is doing a live demo and needs an internet hotspot. He is the guy spending hours during and after Drupal Camps piecing together audio and video for maximum quality. The Drupal Community has so much to thank him for, the Aaron Winborn award couldn’t have been awarded to anyone more deserving. 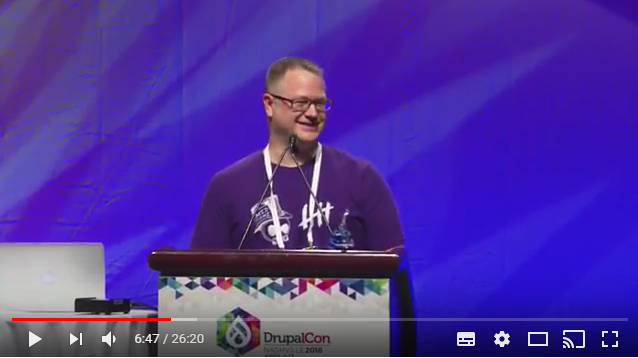 On Kevin, from the community:

“It has become a no-brainer to invite Kevin to Florida DrupalCamp and have him record and post all of our sessions online. He makes it easy for us to share our great content with a world-wide audience by coming prepared, making it easy for presenters, and uploading the video almost immediately. He’s a true asset to the community.”  – Mike Anello (Florida Camp)

“His never-ending abundance of energy and positive contributions in the form of Drupal Camp video services in the US is unmatched. At the camps where I’ve spoken or helped organize he has been a great person to work with through the whole process – helpful and organized across the board.” – Aimee Degnan Hannaford (BADCamp)

“We appreciated Kevin’s willingness to send recording equipment and documentation to our event so that we could record sessions, even though he couldn’t be there. He was encouraging and helpful all along the way.” Amber Matz (PNWDS Portland)

Thank you Kevin for your contribution to community, for sharing your story with us, and for being a most excellent secret keeper! And thank you to the hundreds of volunteers that make Drupal Camps, Cons, meetups and picnics a success every year. And thank you AmyJune for this most excellent Drupal Community Spotlight article!