This is a guest blog post by Juri Strumpflohner. Juri is a full-stack developer, architect and tech lead with a passion for frontend development, especially Angular. Juri writes technical articles on his personal blog and is the author of some online video courses. He also likes to engage and help the Angular community on Twitter, so follow him for more interesting news and articles around Angular and frontend web development. Juri was an attendee of NG-BE, Belgium’s first Angular conference last week and did a better job covering our announcements than we would have done, so we are cross-posting his blog post here.

At the 8th and 9th of December 2016 was NG-BE, Belgium’s first Angular conference. Igor Minar (Angular lead dev) attended as the keynote speaker with some interesting announcements regarding Angular’s release schedule. Please read the entire post, there are a couple of important things.

Igor was extremely open and transparent about the announcement and even about the way of presenting it. He basically created the presentation openly the day before the conference:

I'll be conducting a major open source experiment at @ngbeconf tonight at 10pm downstairs in the main room. Come if you want to participate.

So here it is: 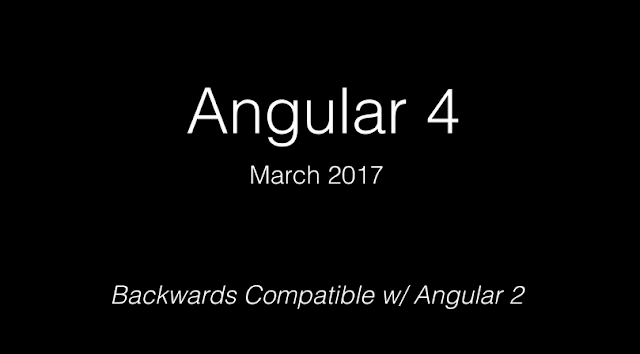 Back in September when the new Angular was finally released, the Angular team also announced they will switch to Semantic Versioning (SEMVER).

As the name already explains, Semantic Versioning is all about adding meaning to version numbers. This allows developers to not only reason about any upgrade we do, but we can even let tools such as NPM do it in a automatic and safe manner for us.

“A breaking change happens whenever you as a developer and consumer of a library, have to step in and adjust your code after a version upgrade.”

So what does this mean for the Angular team? As with every evolving piece of software, breaking changes will occur at some point. For example, giving a compiler error for existing application bugs that went unnoticed with the previous compiler version, anything, that will break an existing application when upgrading Angular, requires the team to bump the major version number.

Just to be clear, as also Igor mentioned in his talk. Right now, even just upgrading Angular’s TypeScript dependency from v1.8 to v2.1 or v2.2 and compile Angular with it, would technically cause a breaking change. So they’re taking SEMVER very, very seriously.

Breaking changes don’t have to be painful!

People that have been following the Angular community for a while, definitely know what I’m talking about. We went from Angular 1 to Angular 2, and it was a total breaking change, with new APIs, new patterns. That was obvious: ultimately Angular 2 was a complete rewrite. (Even though there are upgrade options for you available)

Changing from version 2 to version 4, 5, … won’t be like changing from Angular 1. It won’t be a complete rewrite, it will simply be a change in some core libraries that demand a major SEMVER version change. Also, there will be proper deprecation phases to allow developers to adjust their code.

Internally at Google, the Angular team uses a tool for handling automatic upgrades, even of breaking changes. This is still something that has to be planned in more detail, but the team is working hard on making this tool generally available, most probably in 2017 in time for Angular 5.

As you might have already guessed, the term “Angular 2” is also kind of deprecated once we get to version 4, 5 etc. That said, we should start naming it simply “Angular” without the version suffix.

Also, we should start avoiding GitHub/NPM libraries prefixed with ng2- or angular2-.

Basically from now on, name all versions of Angular simply “Angular”. Try to avoid using the version number, unless it is really necessary to disambiguate.

All the docs – even for Angular 1 – will be aligned to this in the coming weeks. Yes, they’ll be dropping “JS” from AngularJS where possible. Also in blog articles, courses, books or whenever you are targeting a very specific version of Angular, consider adding a header line which states that:

That helps avoid confusion for your readers, especially when you are writing about specific APIs.

Why not version 3 then?

The core Angular libraries live in one single GitHub repository at github.com/angular/angular. All of them are versioned the same way, but distributed as different NPM packages:

Due to this misalignment of the router package’s version, the team decided to go straight for Angular v4. In this way again, all the core packages are aligned which will be easier to maintain and help avoid confusion in the future.

Also it is important to understand how Angular is being used and integrated inside Google (Igor speaks about this here in his keynote). All Google applications use Angular version equal to the current GitHub’s master branch of the Angular repository. Whenever a new commit lands in master, it will be integrated into Google’s single, giant mono-repo, where also other products such as Maps, Adsense etc. live. As a consequence all of the projects using Angular internally at Google will run their extensive test suites against this new version. This makes the team very confident to cut a new release, since it will contain the exact combination of versions of Angular packages that have been already battle tested inside Google. Thus, having aligned versions totally makes sense and makes it easier to maintain them over time, which in turn helps the team be more productive in releasing new features.

The fact that breaking changes will arrive, doesn’t mean they will arrive every other week. The Angular team committed to time based releases that occur in three cycles:

The next 3 months will be dedicated to finalizing Angular 4.0.0. 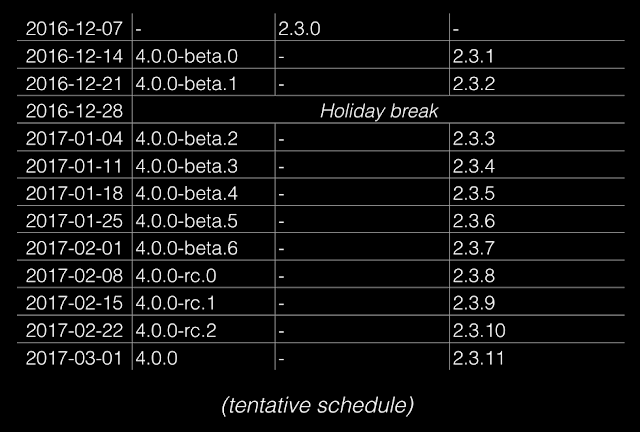 After Angular 4.0.0, this will be the tentative schedule for further releases: 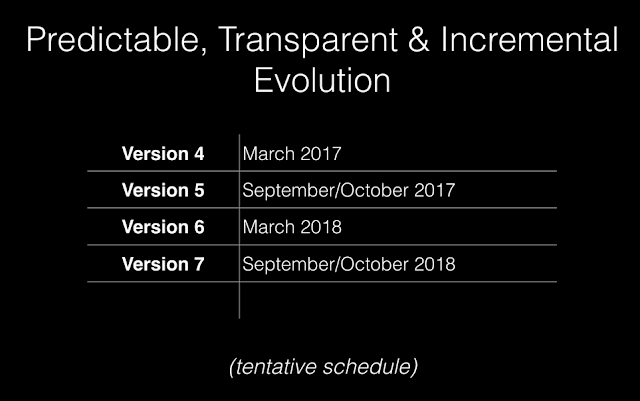 Video: See the announcement yourself

Also, I’d like to thank Igor for being so open at presenting this data, especially since he knows what a sensitive topic breaking changes are and have been in the past. This means a lot and I hope that the community will realize why all these changes are good for everyone involved.