Thunder is proud sponsor of the Media and Publishing Summit ahead of the DrupalCon in Nashville. Meet us on 9th April and during the DrupalCon to learn more about Thunder and how it is used in professional publishing. 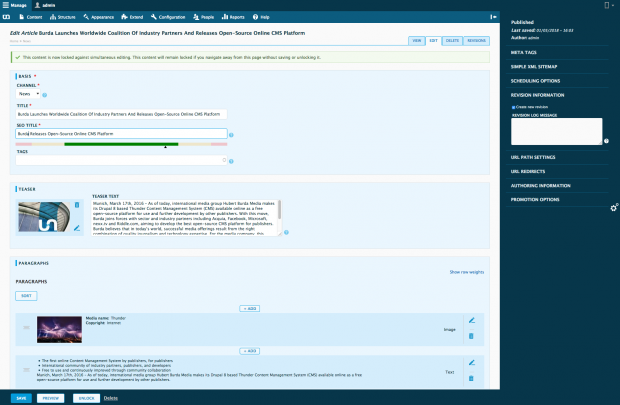 Thunder is the Drupal 8 distribution for professional publishing. Thunder was designed by Hubert Burda Media and released as open-source software under the GNU General Public License in 2016. As members of the Thunder community, publishers, partners, and developers build custom extensions and share them with the community to further enhance Thunder.

Thunder consists of the current Drupal 8 functionality, lots of handpicked publisher-centric modules with custom enhancements (our own Thunder Admin Theme, the Paragraphs module, the Media Entity module, the Entity Browser module, and lots more), and an environment which makes it easy to install, deploy and add new functionality (e.g. the Thunder Updater).

We at the Thunder Core Team believe that publishers do not compete with each other through technology, but rather through content and brands. That is why the German publisher Hubert Burda Media established the Thunder community which aims to join forces among media companies by sharing code and innovation power. The goal is to innovate faster and spend less money overall by working together.

The Thunder community’s core product is the open-source content management system Thunder. Community members develop useful modules, use them for their own purposes and share them with the community by publishing them under the GNU General Public License. Neither Hubert Burda Media nor the other publishers in the community charge anyone for their contributions.

Any company publishing content professionally is welcome as a member of the Thunder community – both as user and as contributor. Anyone can join by contributing to the distribution. The usefulness and richness of Thunder’s functionality directly benefit from the number of contributors.

Why Drupal was chosen:

For Burda, Drupal is the content management platform of choice. It is a free and open-source content-management framework written in PHP and distributed under the GNU General Public License.

The standard Drupal core already provides the essential features, e.g. user management, menu management, RSS feeds, taxonomy, page layout customization, and system administration. It is easily adaptable and extensible with thousands of modules provided by a global community of users and developers. In addition, developers at Hubert Burda Media have had previous good experiences with Drupal. Drupal is therefore a tried and tested basis and has become even better with Drupal 8.

Thunder started as a way to share innovation and synergies among the many different brands and products within the Burda Corporation to save costs and speed up the time to market. It did not take long until we realized that the model that worked within the very diverse Burda universe would be useful for almost all digital publishers. That was when we decided to open source the distribution.

Due to its open source basis on Drupal 8, all features and functionality within Thunder are available to anyone wishing to benefit from Burda’s industry experience. Individual brands can add modules to tailor the system to their specific needs. Many of those “specific” customizations will prove to be valuable to more than just the organizations they originated from. We therefore designed Thunder in a way that we can easily incorporate those add-ons into the main distribution and share the features among all brands. 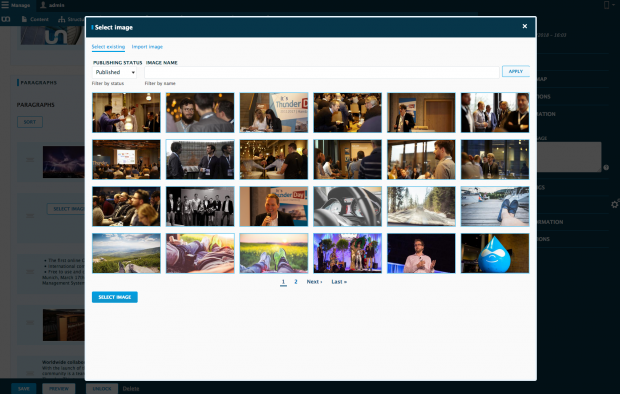 We aim at becoming the best open-source content management system for professional publishing. In this, we focus on the creation of content. We want to help editors to create articles, to add media, to build landing pages, in short, to share their stories with the world.
We want Thunder to be a CMS jointly developed by its users and are therefore working towards building a community of publishers, IT agencies, and anyone else who shares our ideas and contributes to Thunder.

Our aim in doing so is to stay very close to the Drupal community and the Drupal core instead of creating a Thunder fork. Whenever we want to implement a new functionality or solve a problem, we try to do this in Drupal core or in the modules Thunder uses instead of fixing things in the distribution.

It’s difficult to measure the time spent on the development of Thunder, as this is an ongoing process. Currently, there are four developers employed by Hubert Burda Media working on the distribution full-time, plus several external developers. They focus on the advancement of Thunder as well as Drupal core and the contrib modules used in the distribution. A community manager is working on coordinating and growing the Thunder community of publishers, developers, and other partners.

We released Thunder 1.0 in January 2017. One year later, at least 60 professional websites that we know of now run on Thunder. In the meantime, we have also released Thunder 2.0 and the Thunder Admin Theme.

Publishing houses grabbed the idea of working together. The Austrian publisher kurier.at, for example, contributed to the liveblog module used in Thunder and developed a new functionality to split text paragraphs.

In community matters, we talked to more than 300 companies worldwide. We established the “Certified Thunder Integrator” program to help publishers to find IT agencies as well as IT agencies to find customers. As of now, there are more than 20 companies certified or in the certification process.

We aim at bringing people together to share experiences. For this purpose, we introduced a Slack team for the Thunder community as well as several social media accounts. Furthermore, we organized the first community event – the Thunder Day – with around 120 participants in November 2017.

Challenges and how we resolved them: 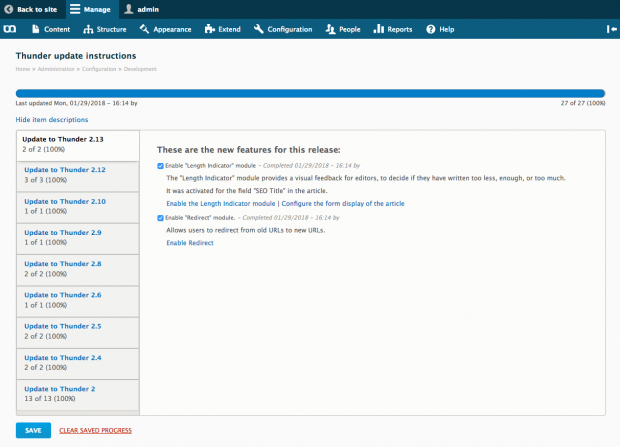 Distributions such as Thunder face the problem of losing control after the installation. How should a distribution actually deliver features and updates? We thought a lot about this problem and introduced the Thunder Updater, the “Thunder way to keep your site up to date”. Thunder checks if installed configurations have been changed – if not, they can be updated. Otherwise, you will get a message telling you there’s an update pending and what to do if you wish to have it. This functionality is currently an integral part of the distribution but we plan to detach it and publish it as a module on drupal.org soon so that everybody can use it.

Writing an Admin Theme is very difficult because Drupal offers so many possibilities to adapt things: If you change something it can have unexpected effects in unexpected places. To avoid surprises, we developed Sharpeye, a visual regression tool. It takes screenshots and compares them in automated tests. This gives us a good overview. We open sourced the tool and you can download it here: github.com/BurdaMagazinOrg/sharpeye

We invested a lot of time into automated testing but it was well worth the effort, not only for Thunder but also for Drupal core and the contrib modules we use since we discovered a lot of bugs there too.

We don’t use a closed issue tracker but publish our tickets on drupal.org, thereby creating transparency. We use Github rather than drupal.org for the development because the developer experience is much better.

Why these modules/theme/distribution were chosen:

In professional publishing, it’s all about the story. It has to be easy to create a story, to extend it, to change its narrative strand, and to enrich it with multimedia content. We use the Paragraphs module for this. Instead of putting all their content in one WYSIWYG body field including images and videos, end-users can now choose on the fly between pre-defined Paragraph Types independent from one another. Paragraph Types can be anything you want from a simple text block or image to a complex and configurable slideshow. This allows editors to structure an article into sub-elements which can easily be created, edited, and reorganized.

Editors want to enrich their articles with pictures, videos, content from social media, and whatever else you might think of. Paragraphs are one part of this, the other is the combination of the Media Entity module and the Entity Browser module. With those modules, editors can easily upload new content but also find and reuse existing entities.

Search engine optimization plays a major role in every editor’s life. Thunder therefore gas a plethora of different adjusting screws, from several meta tags for Facebook, Twitter, and Open Graph up to the simple XML sitemap.

The editor’s daily life is a lot about planning. With Thunder, you can schedule articles, ensuring they will be published at a given date and time. Even more importantly, you can also schedule the time at which an article or a picture should not be shown on the website anymore, e.g. if the contract period for a photograph has ended or an event announcement isn’t useful anymore.

Our primary focus is making the editors’ work with Thunder as easy as possible. In order to achieve this, we created the Thunder Admin Theme based on findings of user tests and a survey conducted with editors working with Thunder.

Find a detailed list of the modules we use in Thunder here: burdamagazinorg.github.io/thunder-documentation/modules

Since we get a lot from the Drupal community, we give our best to contribute back, e.g. by fixing the bugs we find through automated tests and by supporting Drupal events and code sprints with developer time, talks, and sponsoring. Christian Fritsch, a member of the Thunder Core Team, contributed a lot of his time to the media initiative. Ingo Rübe, the initiator of Thunder, is a member of the Drupal Association’s Board of Directors.